A great introduction to the great Imperial Cities of Morocco, that have all, at some point in Morocco’s history, been the capital of one of the dynasties of the kingdom. The imperial cities of Fes, Marrakech, Meknes and Rabat have played important roles throughout the history of Morocco and, today, you can still marvel at the glory of their religious architecture and the unique charms of their historic heritage while savoring their exotic culture.
This program allows you to experience the different flavors and wonders of the Kingdom in an adventure celebrating its history, culture, gastronomy and architecture.

Guided visit of Rabat –
As the capital of Morocco, Rabat is the primary home of the King & government.
Founded in the 12th century and once known as the Camp of Victory, Rabat today is essentially a modern city of gardens and monumental gateways & buildings.
This visit will take you through the major monuments of the city…
Visit the splendid Kasbah of the Oudayas, the Hassan Tower, and the Mohammed V mausoleum.

This visit ends with discovery of the Méchouar or the main square of the Royal Palace.

Night at the hotel of your choice.

Moulay Ismail’s creation was to be much talked of in the East and in Europe, most especially at the French court of King Louis XIV. This period was one of the high points in the city’s rich history when most of the cities fabulous monuments were constructed; such as Bab El Mansour, or Heri Es-Souani, or the grainstore stables, which are considered to be one of the sultan’s finest creations.

A historic city whose splendor attracted architects, engineers and artists, Meknes and its surroundings have remained unchanged for centuries.

Lunch in Meknes or en route.

Then we head through the holy city of Moulay Idriss which lies about 27 km from Meknes, harboring the sanctuary of the founder of the Idrissid dynasty- the first Moroccan Dynasty – over 12 centuries ago.

Visitors arrive to Fez as if awakening from a dream one might have been making during a trip in a time machine.

Night at hotel of your choice.

Buffet Breakfast at the hotel

Full day guided visit of the medina of Fez – the 1.200 year-old Fez, founded by King Moulay Idriss 2nd : visit the medieval old city or médina, visit the Karaouyine Mosque & university (from outside only) which was once the largest university of the world … back in the 13th century with more than 3.000 students.

Lunch in a traditional Riad in the medina.

In the afternoon continuation of the visit of the medina or the modern part of the city.
Return Night at hotel of your choice.

In the morning depart for Marrakech via the scenic route parallel to the Atlas Mountains. Discovery of the Tadla Valley and the Atlas road: an enjoyable route due to the numerous changes of the scenery: fertile valleys, mountains, hills, farming areas, and long stretches of pasture land scattered by villages…

Buffet Breakfast at the hotel

Half day guided visit of Marrakech… Nestled on a plain at the foot of the snow-capped High Atlas Mountains, Marrakech is one of the most alluring cities in Morocco, still surrounded by its original fortifications. The heart of the old town is the Jamaa el Fna square, the huge main square where everything happens: from morning to night it throngs with life, orange and date sellers ply their trade from stalls, traditional water sellers wander around, snake charmers, musicians, acrobats and storytellers come and go to please the crowds. And, as night falls, food stalls appear as if by magic, and you can sit down and feast on freshly cooked local dishes. Yet Marrakech has many faces and you will explore the historic Medina of the Almohads, the majesty of the Bahia Palace along with the more modern boulevards and cafes of the French new town.

We will then proceed to discover the Koutoubia mosque and square, symbol of the city of Marrakech…

After that we will meander through the souks and medina with our tour guides…to take a first-hand look at the real face of life inside the old medina which has not changed much since the middle ages; the neighborhoods still inhabited by locals, the souks where people of the medina still do their daily shopping and the various and very skilled craftsmen …the materials they use, their shops, tools and much more…

Then continuation through Marrakech’s narrow labyrinth streets to one of the Jamaa el Fnaa square’s terraces with an amazing view, taste a mint tea and discover this meeting point of different artists such as musicians, storytellers, and snake charmers.

Some free time to discover the square and do some shopping.

Lunch at the restaurant of your choice in the Jamaa El Fna square, classified as world historical heritage by the UNESCO.

Return to the hotel / Free time.

Night in the hotel of your choice in Marrakech

DAY 7 – Departure from Marrakech:
Buffet Breakfast at the hotel

Depart for the airport.
Departure. 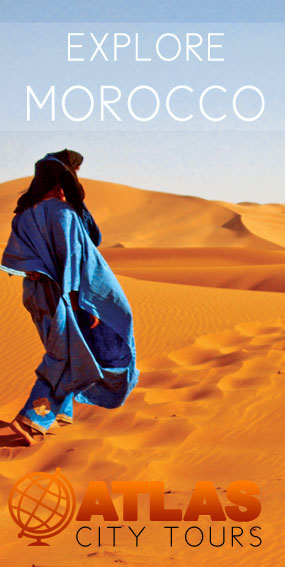